The new facility has a manufacturing laboratory for space startups to rapidly prototype and experiment with flight hardware products, allowing them to quickly and safely iterate new designs for spacecraft, robotics, and satellite components. Startups are also supported by Saber’s professional space engineering expertise and TCG’s decades of business relationships.

Since 2016 Australia has been a breeding ground for new startups, generating nearly 30 new ventures every year, often outpacing nations overseas. Many of these startups gained investments and are offering the nation new opportunities, generating high tech jobs and hundreds of millions of dollars.  The market has outsized potential for the Australian economy if the right infrastructure and processes are in place.

Saber Astronautics’ founder and Chief Executive Officer, Dr Jason Held, explained the importance of space startups in shaping Australia’s ecosystem, “Australia used to import $4Bn each year on overseas space tech.  Now with such strong local growth the nation saw a tremendous opportunity to build locally.  This was a major contributing factor in the birth of the nation’s Space Agency.” The Australian demand for space now in 2022 is up to $10Bn, and there are strong calls for local manufacturing, and for Australia that means new ventures.

“We wanted an incubator that was by space companies for space companies, and that means a higher risk profile and familiarity with how people buy and sell in space,” explains Dr Held.  “Being a space startup in a sea of fintech and web can be a lonely experience, and having mentors that value the space industry is vital.  The good news is, if we can show success, traditional investors will take notice, and there is plenty of validation to help them along the way.”

It also meant breaking the traditional paradigms behind startups, such as frequent pitch events which don’t always match the pace of space ventures. Wolfpack cohorts focus on customers first instead, as the fundamental for their business. However, instead of competing, the startups aggressively collaborate with each other to win business together as a group.

“This is by far the most open and progressive thing we’ve ever done,” said Dr Held.  The collaborative “hunt-as-a-pack” model for business is paying off– Collectively the startups generated $3.2m in funding from civil and defence customer programs.

Startup companies in the first Wolfpack Space Hub cohort include: Spiral Blue, Sperospace, and Dandelion. Spacesuit startup Metakosmos is the first company accepted to the new cohort starting in Q2 2022.

The Wolfpack Space Hub is a joint venture between Saber Astronautics and the TCG Group. The Wolfpack received $500k in funding from an Entrepreneurs Australia incubators grant and from commercial investors in 2021. 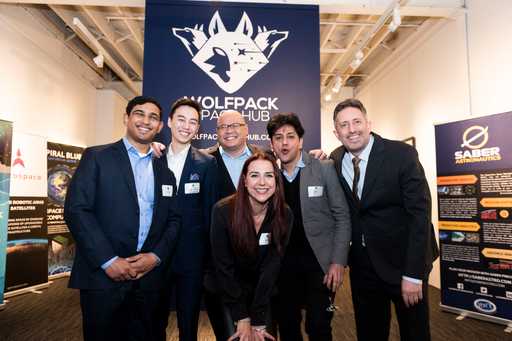 BY WAY OF BACKGROUND